Home / Publications / Bricks and blankets – not barrels and bombs

This policy brief suggests that stabilisation efforts in Somalia should be viewed through an alternative lens beyond the prevailing focus on military operations. While the relevance and role of military operations must be acknowledged, these relative successes should be accompanied by non-military approaches to achieve short-term stability and lay the foundation for long-term peacebuilding. The policy brief identifies five factors that are vital to attaining sustainable peace.

Dr Jide Martyns Okeke previously worked as a non-resident senior research fellow at the Norwegian Institute for International Affairs, and a consultant for the Institute for Security Studies. Before that, he led policy development on peace support operations at the African Union Commission. He holds an MPA from the Harvard Kennedy School of Government and a PhD in Development Politics and International Studies from the University of Leeds in the United Kingdom.

This policy brief is funded by the Government of Norway through its Training for Peace Programme. 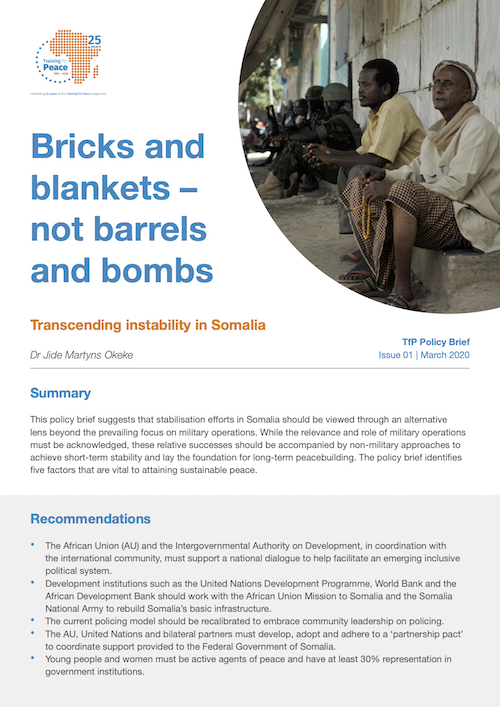 Author: Dr Jide Martyns Okeke
Year: 2020
Related Infographic: Timeline of instability in Somalia
Download full Publication : https://trainingforpeace.org/wp-content/uploads/TfP-Policy-Brief-1-March-2020-Web.pdf
Stabilisation efforts in Somalia have historically been dominated by military operations. While the relevance and role of these operations should be acknowledged, a new approach must now emerge. On 28 January 2020, the African Union Commission (AUC) hosted a Military Operations Coordination Committee (MOCC) meeting on Somalia in Kampala, Uganda. This was the 29th MOCC held by the AUC in eight years. Despite sustained military interventions against Al-Shabaab, the extremist group has remained adaptable and continues to threaten civilian populations, personnel of the African Union Mission in Somalia (AMISOM) and Somali national security forces. Al-Shabaab attacks intensified in 2019. In June, AMISOM reclaimed the agriculturally rich town of Barire from the terrorist group. Two weeks later, Somali national security forces – backed by the United States – relaunched offensive operations as Al-Shabaab fighters had re-organised themselves in an attempt to gain back control over Barire. In mid-July, a suicide bomber who was alleged to be affiliated to Al-Shabaab rammed a car containing explosives into the Asasey Hotel, located in the port city of Kismayo. This terrorist attack claimed the lives of 26 people including Hodan Nalayeh, a Somali-Canadian journalist, and injured several more. Ten days later, a suicide bomber walked into a high-level security meeting in Mogadishu, detonating explosives that would eventually kill the mayor of Mogadishu, Abdirahman Omar Osman, along with at least six other government officials.

National dialogues in the Horn of Africa 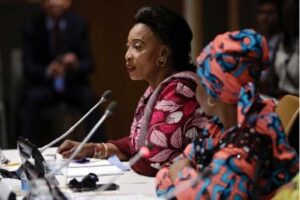 Empowerment delayed: Trends in women, peace and security in Africa